Thie present work investigates the changes and continuities in the economic structure of Galicia during the 2008 crisis and the following economic recovery cycle. We will address this issue from the perspective of the critical perspective on economic development theory. To do so, we will use the information provided by the 2008 and 2016 input-output tables, carrying out a comparative analysis. In the first place, we compare the key sectors that define the core of the internal production scheme. After that, we study Galicia´´ s   comparative advantages and disadvantages of its external insertion in Spain, the European Union and the world. The results obtained indicate that the economic structure of Galicia has not changed in its fundamental aspects after the economic crisis. This result suggests that the causes of the economic growth and the improvement of the trade balance following the crisis must be looked for elsewhere.

Download data is not yet available.
Other statistics
Last news
More read | More downloaded
INDEXED/ABSTRACTED IN 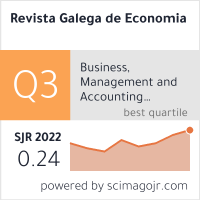